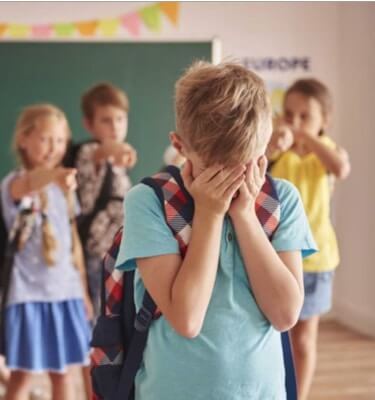 The mother of a 7 year old boy came see to me because her son was terribly bullied – right after school. In the middle of the session, it became apparent that the mother had passed on inherited trauma about being bullied in the first grade to her son . After I resolved that and released a heart fortress with the built-in emotions of hate, defeat, and anger for both of them, the mother started crying on the phone. She told me that this is an issue that she has never really left in peace since first grade. We went through a number of situations in their lives, all of which related to bullying in one form or another, and released a lot of stuck emotions and a lot of worry energies about her children,  expectations and beliefs. By the end of the session she became more relaxed and happy. When she said to me out of nowhere, “I don’t know when was the last time I laughed like that,” she immediately realized that her son was reflecting this subject to her, unlike herself, forcing her to do something about it! We resolved some stuck emotions and the trauma of disappointment and grief for her son and already in the following week at school the picture was completely different. His mother reported that her son was now part of the  group of children that previously been bullying him.   He no longer came running to go home with his mother as before, but grumbled that she was there too early to collect him.

Blood cancer is no longer detectable even before chemotherapy begins

Shortly after the apprenticeship seminar, a participant was confronted with the terrible news that her…

Behavior of the son in the family

Events in family life affect our personality. The mother of a ten-year-old boy contacted me…

In Starnberg, last summer, there were one or two cases at the lake, where we…